Sometime around May 2004 we decided we were going to get chickens.  We decided to build out own coop.  I researched several designs online but wanted something that wouldn’t stick out and would blend in with the existing shed it was going to be placed near.  I made some measurements of where it would be placed and got to work sketching out what I wanted for a coop.  I refined the design and came up with how it would be framed on paper. 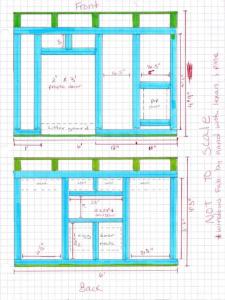 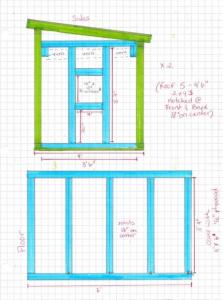 With knowledge of what I needed for lumber I called our local lumber yard and had T&G siding and the framing lumber delivered.  This is clearly overbuilt for chickens but it still cost less than a manufactured chicken coop.  My wife and I built it from the ground up with basic hand tools and a circular saw.

The coop was slid into location and populated and for a year it remained this way.  After the winter I decided it needed to be improved.  I did not like trudging out to the shed in the dark at night just to close a door so I began thinking of a way to automate the task.  I did some research on the internet but didn’t find anything I liked that wasn’t crazy expensive.  So I once again got to work sketching out ideas on paper and designing my very own coop door.  I built a frame out of 2×4 and used my table saw to cut some 14″ grooves into it.  I then built a door frame out of some scrap oak flooring with tongues that conveniently fit into the grooves in the sides of the frame I made.  This was backed with luan plywood to complete the door.

I designed a simple winch mechanism to lift the door out of a wiper motor and mounted that at the top of the frame.  To control the door I designed a simple Arduino circuit with a CdS cell to detect dusk and dawn.  There are limit switches at the top and bottom stroke of the door so it knows when to stop the winch.  Originally the board was built around an H-Bridge chip (LMD18201) 4rated for 3 Amps but the stall current of the motor turned out to be too much.  I redesigned it with a DPDT Relay and FET so the speed could still be controlled.  I designed the board in Eagle and etched it in my garage.

Since the LMD18201 wouldn’t cut it I designed another little board to house a relay and the FET (for PWM speed control).  This is rated for up to 80 amps and can handle any monster motor I throw at it.  The LMD18201 was removed from the original controller and this one was patched in it place.  All the components were packed in a nice weather tight junction box and mounted on the side of the chicken coop.  The controller is powered by a 12V Battery which is trickle charged. This meets the high current demand for the motor while providing a battery backup in case power failed for a couple days.  Originally this was charged with a solar panel but I had issues with the panel reverse biasing in the cold and draining the battery.