I recently purchased a package fo some cheap Arduino Nano development boards from Amazon.  For a couple bucks more you get 5 instead of 3. The only downside is they have the CH340G serial chipset.  In order to get these to program on the mac and avoid the stk500_getsync() errors a couple steps need to be followed:

Hope this is helpful for someone having these issues.

I recently renovated an Iceman Clear3 Chiller I had recieved from someone who had a knee replacement.  The pump no longer worked but I kept this around for the hose quick disconnects and the nice bucket.  When I removed the two screws holding the pump in the nice trim plate on the back fell off.  So I whipped up these retainers in Fusion 360 and printed them out on my trusty old Makerbot Thing-O-Matic and about 10 minutes later I had it back together.  Works like a charm, looks nice, and as a bonus I can see the water flowing into the tank.  Just drop in a couple Blue Ice to keep things chill for the long jobs and replace them later.

You can download the STL for the retainers on Thingiverse:  Iceman Chiller Backplate Retainer

END_OF_DOCUMENT_TOKEN_TO_BE_REPLACED

I busted the knob on my 10# CO2 tank so I designed a quick replacement in Fusion 360 and printed it out.  The STL file for the knob can be found on Thingiverse here: Tank Knob for CO2 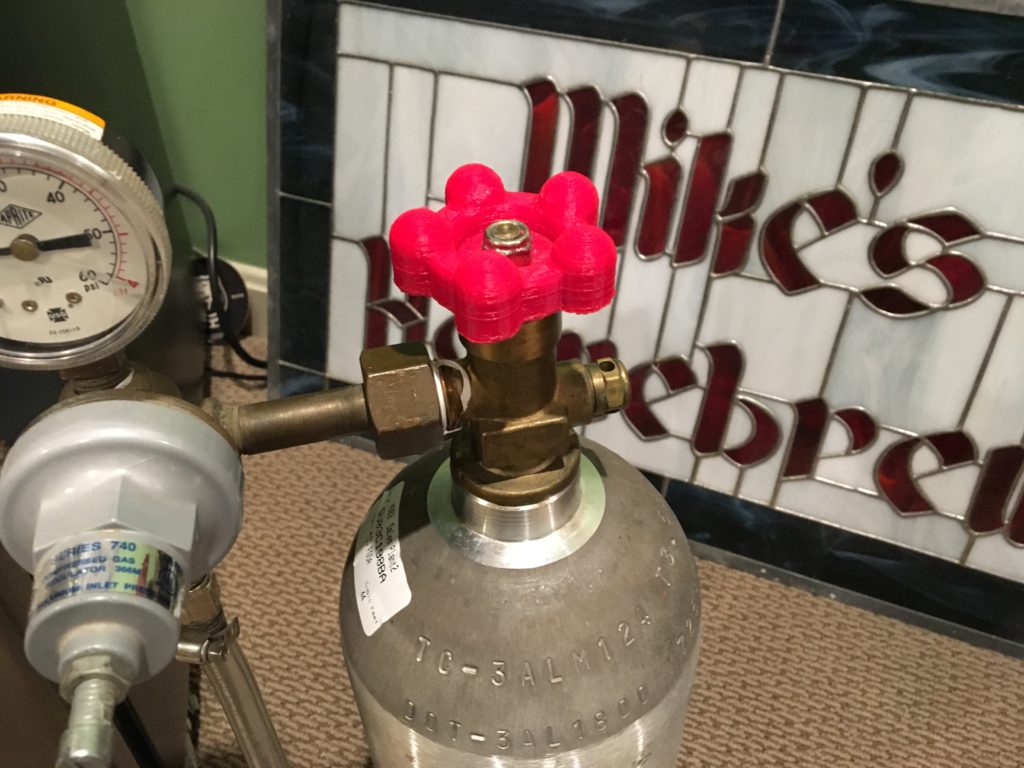 I am writing this post to let new owners of a Jayco Jayfeather X213 or similar recreational vehicle what they need to bring along with them on their camping trips.  The camper comes well equipped from the factory but several items are required to make your vehicle completely usable and enjoyable on a camping trip.

Once you have the basic supplies for your site setup you can prepare your camper for the road.  I always go-through my pre-travel checklist to make sure I am ready to go.

END_OF_DOCUMENT_TOKEN_TO_BE_REPLACED

HomeKit serves as a software framework that lets users set up their iPhone to configure, communicate with, and control “smart-home” appliances.  By designing rooms, items and actions in the HomeKit service, users can enable automatic actions in the house through a simple voice dictation to Siri or through apps.  This is also a closed protocol which also means only registered vendors can have their products certified to work.  In addition X10 was a protocol developed in developed in 1975 for home automation.  Because it’s been around for a while the devices are somewhat cheaper but  this also means that it doesn’t sport a connection to the newest protocols like HomeKit.  I experimented with voice control years ago (circa 2000) with HomeSeer but was never satisified with the quality and the fact that I would have to wire microphones all over my house.  Now that we have Siri and other fantastic voice recognition and this cool HomeKit integration the future for this old protocol is now.

END_OF_DOCUMENT_TOKEN_TO_BE_REPLACED

I finally tracked down the “Blocked Sign-in Attempt” messages on my Gmail account.  My old ReadyNAS NV+ had alerts setup on it using my Gmail SMTP.  Unfortunately Google has limited access to SMTP unless you allow less secure apps.  I didn’t want to allow this on my main e-mail account so I setup a “relay” account that I could enable the less secure access in. END_OF_DOCUMENT_TOKEN_TO_BE_REPLACED

I recently upgraded my build surface from Kapton tape on Aluminium to BuildTak.  I was a little concerned about this because like everything else there are rumors that ABS won’t come off.  But I figured for the price for 3 sheets for my little Thing-O-Matic it was worth a shot so I didn’t have to deal with blue painters tape if I wanted to switch to PLA.  I found my BuildTak on Amazon for around $8.00 (3 sheets).  I peeled off my old Kapton tape and cleaned off the print bed.  I will say this is way easier to install than Kapton since it’s a small area and the tape forms nice bubbles under it when it adheres to the platform.  I used the edge of a credit card to ensure good adhesion to the platform.

END_OF_DOCUMENT_TOKEN_TO_BE_REPLACED

Fusion 360 is an awesome CAD/CAM package from Autodesk.  The licensing is reasonable,  the support is good, the CAD/CAM is top notch and it runs on both macOS and Windows 10.  Recently I acquired a Banggood A3 2.5W Laser Engraver and decided, since I had a good tool chain for cutting on my ShapeOKO I may as well carry that over to my Laser.  I started with GRBL 1.1d (edge) release which was just just came out and built it using the PlatformIO IDE.  I did this on my Mac and uploaded the resultant hex file using Xloader on my PC that’s connected to the laser.  The compiled hex I used for my Atmega328 Nano that was installed on my laser is below.  Please note if you were not running GRBL 0.9 on your laser prior you should remove the nano and set the jumper to 0.9 on the controller board.  Note if you are using a Smoothie board you can just follow along with the tool path and gcode generation portion that follows and use the Smoothie post that is already included.  The GRBL post that’s included does not support the new waterjet/laser features.

END_OF_DOCUMENT_TOKEN_TO_BE_REPLACED

There are several reasons I will not use a Next Thing Co. C.H.I.P in another project.

END_OF_DOCUMENT_TOKEN_TO_BE_REPLACED

I recently found some nice hard pine thrown away from a wood processing place down the road and a scrap piece of what looked like an aluminum awning track at my local transfer station/dump.  The channel fit the exterior grill mount so I decided to whip up a quick table with the discarded pine I had found.  This mounts on the exterior of the camper with the channel and a paint-stick extension.  The paint stick serves double duty along with a brush head to remove the debris from the slide-out before pulling it back in.  The construction was simple and was built based on some quick measurements I did.